Managing the symptoms of Parkinson’s Disease with medical cannabis: Exploring the patient perspective 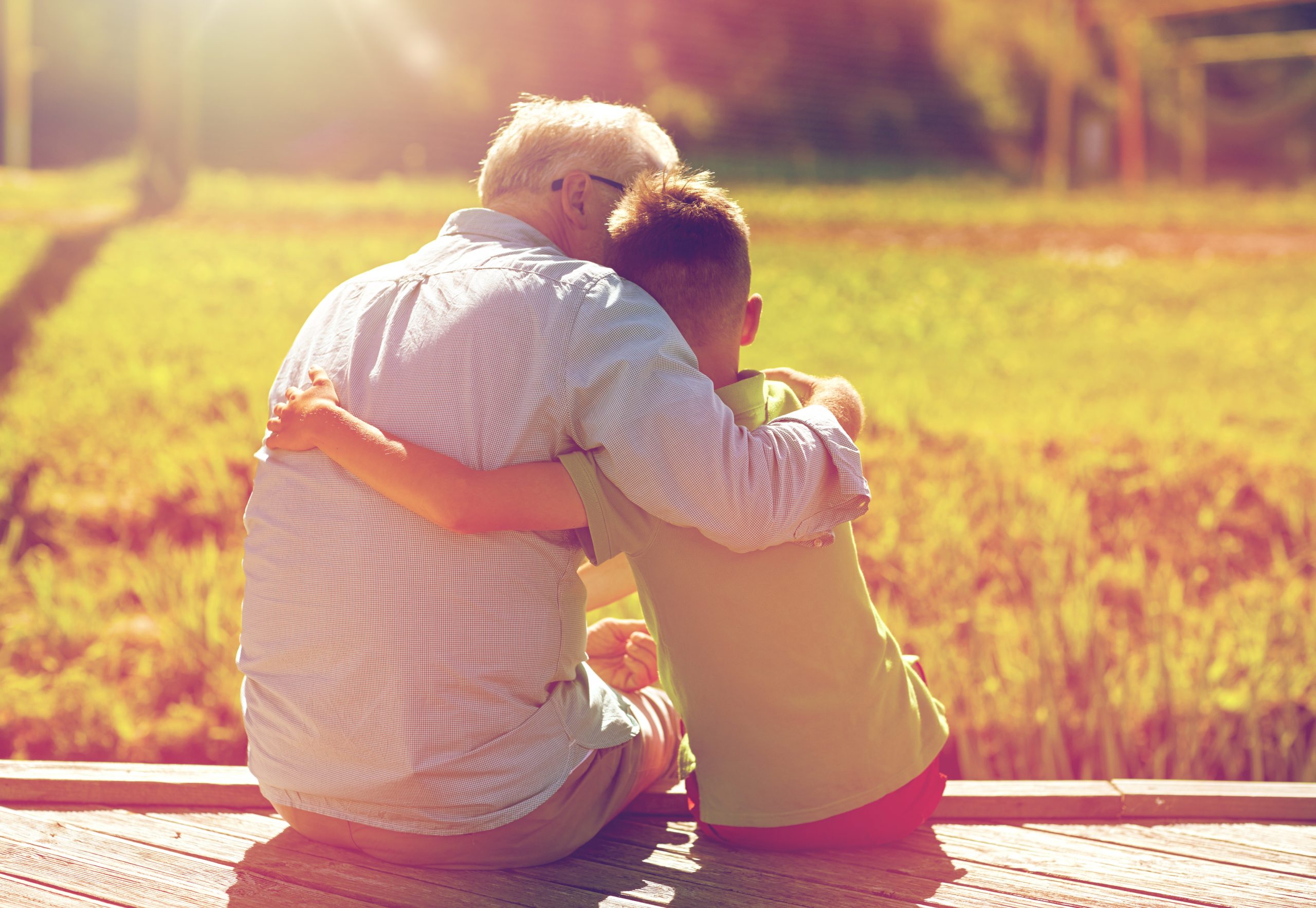 Patient questionnaires reveal that some Parkinson’s disease patients are managing their own symptoms with medical cannabis, with reported improvements in symptoms. Nancy Cross, Analyst at Lightning Health takes a look at the power of the patient perspective and its importance in increasing the understanding of the potential benefits associated with medical cannabis.

Two patient questionnaires published this year investigate the knowledge, experience and perceptions of people with Parkinson’s Disease (PD) who use medical cannabis to treat their symptoms. These studies highlight there are still many issues surrounding medical cannabis including fear and lack of understanding among patients, lack of evidence, stigma and a hesitancy from healthcare professionals. With little uniformity in the global legal regulation of medical cannabis-based products, and many people accessing unregulated and illegal sources of cannabis, the medical cannabis area is extremely complicated and nuanced. However, despite various barriers to access, these studies indicate that there are many people with PD in Germany and the U.S. who are already using cannabis-based products to treat their symptoms, with reported improvements in motor and non-motor symptoms, and many more are interested in increasing their understanding and experience with these products. Continued engagement from patient populations will prove crucial in increasing the evidence base for clinical benefits of medical cannabis and communicating this across all stakeholders.

PD is the second most common neurodegenerative disorder after Alzheimer’s disease with a global prevalence of 6.1 million cases in 2016 [1,2]. As the global population ages, diagnoses of PD are increasing, and it is estimated that between 12 and 17 million people may be living with PD by 2040 [3].

People with Parkinson’s experience a range of motor and non-motor symptoms which worsen as the disease progresses [4,5]:

The disease has a significant impact on the quality of life of patients, associated with both motor and non-motor symptoms, and has been shown to impact mental and physical health more than many other long-term chronic conditions [6]. Caregiver and patient quality of life are closely correlated. As individuals with PD require assistance with a range of everyday activities such as feeding, bathing and taking medication, caring for an individual with Parkinson’s can have a considerable impact on all aspects of the caregiver’s life [7]. The burden of Parkinson’s is not only felt by patients and their caregivers; there is a huge economic burden placed on healthcare systems. In 2010 Parkinson’s was estimated to cost €7.7 billion in Europe [8].

Treatments capable of reducing the symptoms associated with Parkinson’s would therefore be expected to help patients stay at home, increase the quality of life of patients and caregivers, and reduce the economic burden of PD on healthcare systems and society.

Two recent questionnaire-based studies performed in Germany and the U.S have been published this year exploring the perception and use of medical cannabis in Parkinson’s populations. In Germany, respondents were recruited from the German Parkinson’s Association and a German movement disorder clinic to assess perceptions and experience of medical cannabis within the PD population [10]. Similarly, members of the Parkinson’s Foundation living with PD across 49 states in the U.S. completed an anonymous survey to gain understanding of the motivations and experiences of cannabis use. [11]. In Germany, cannabis is legalised for medical purposes for those living with a serious disease for which a generally recognised treatment is not available or is not appropriate for that individual, or if there is the prospect of improvement of the disease condition or of serious symptoms [12]. In the U.S., cannabis is currently medicinally legal in 33 states, but both state and federal law dictate its legal use. There is currently only one cannabis-based product with FDA approval for the use in certain types of seizures in children [11,12].

The study in the U.S. revealed that roughly a quarter of respondents had used cannabis in the last 6 months, with 63.6% of users citing purely medical reasons for their use (Figure 1A). Whereas results from the German study revealed that 8.4% of users attributed their use of cannabis to the fact that they had Parkinson’s (Figure 1A). In the US, the key symptoms patients were trying to treat were anxiety, pain, sleep disorders, stiffness and tremor. General symptom improvement was also one of the most common reasons for continued use of cannabis among patients, reported by roughly 40% of cannabis users (Figure 1B). Other reasons driving continued use of cannabis-based products included relaxation and an improvement in daily activities.

Figure 1: Reported reasons for the use of cannabis and common barriers to use in PD patients in the U.S. and Germany 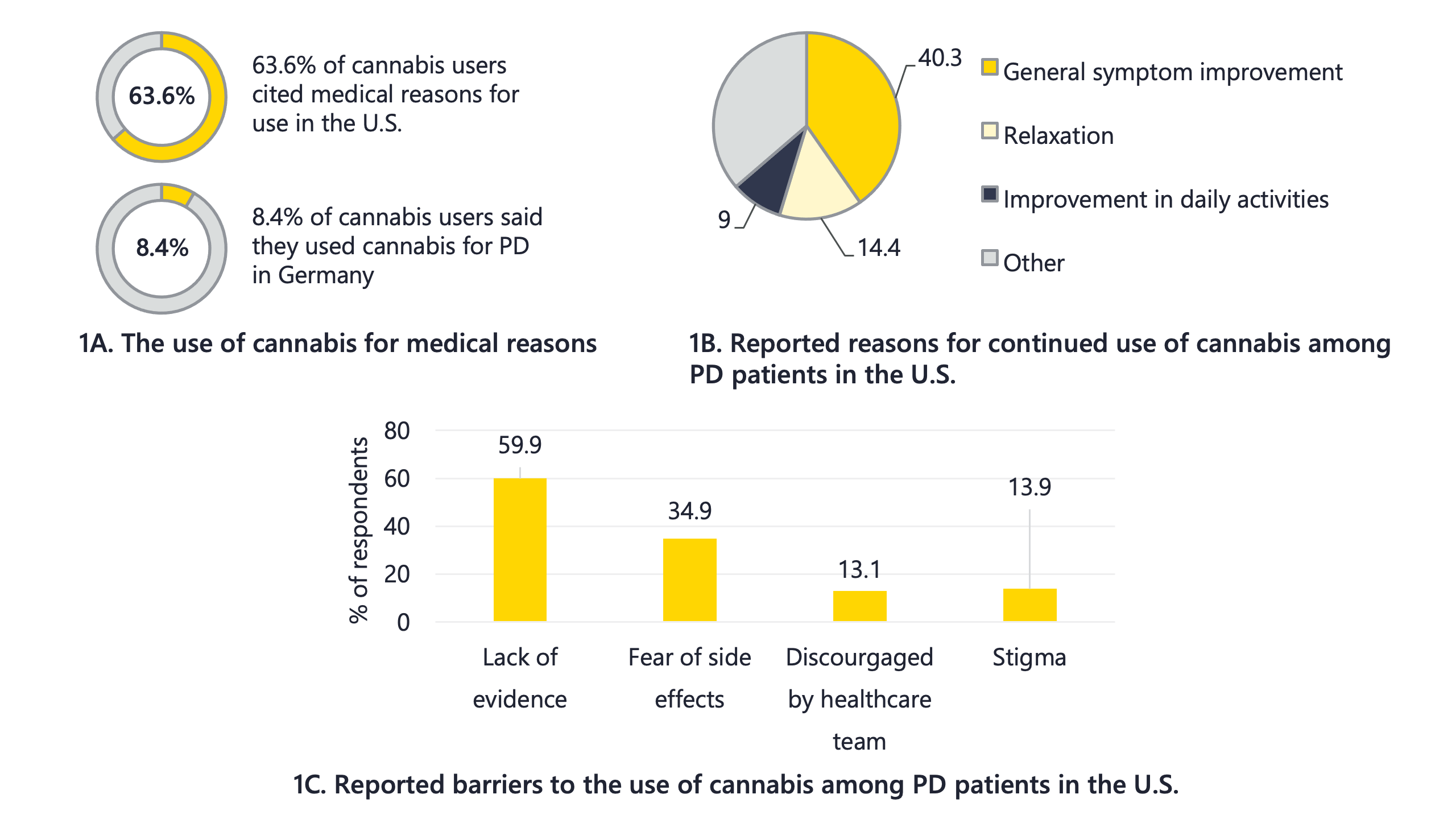 Over half non-users in the U.S. study stated lack of evidence of the efficacy of cannabis discouraged them from using cannabis (Figure 1C) and 76% of non-users claimed that evidence supporting cannabis use for PD would be the most influential factor in any deliberation to begin use. 13.1% of non-users claimed that they were discouraged by their healthcare teams and 54.6% of non-users said that encouragement from their healthcare team would influence their decision on whether to use medical cannabis. Fear influenced the decisions of respondents from both cohorts. In the U.S., a fear of side effects, with 35.5% of non-users stating that better understanding of the side effects would influence their decision, and in Germany, a fear of addiction was reported by nearly half, 45.6%, of non-users.

In those patients that self-reported as cannabis users, many reported an improvement in their Parkinson’s symptoms in both the German and U.S. studies. 41% and 42.9% of users in the U.S. reported improvement in motor symptoms and non-motor symptoms, respectively (Figure 2A). As motor and non-motor symptoms of the disease are closely associated with patient and caregiver QoL, self-reported improved symptomology of Parkinson’s with medical cannabis treatment could provide the potential to improve patient perception of QoL. Similarly, 54% of cannabis users in the German cohort reported that they perceived a clinical benefit from using cannabis-based products. Of these respondents reporting successful use of cannabis, half claimed that it had an equal effect compared to levodopa or dopamine agonists (standard treatments of PD) and nearly a quarter claimed a greater effect (Figure 2B).

Figure 2: Patient perception of the benefits of cannabis in PD 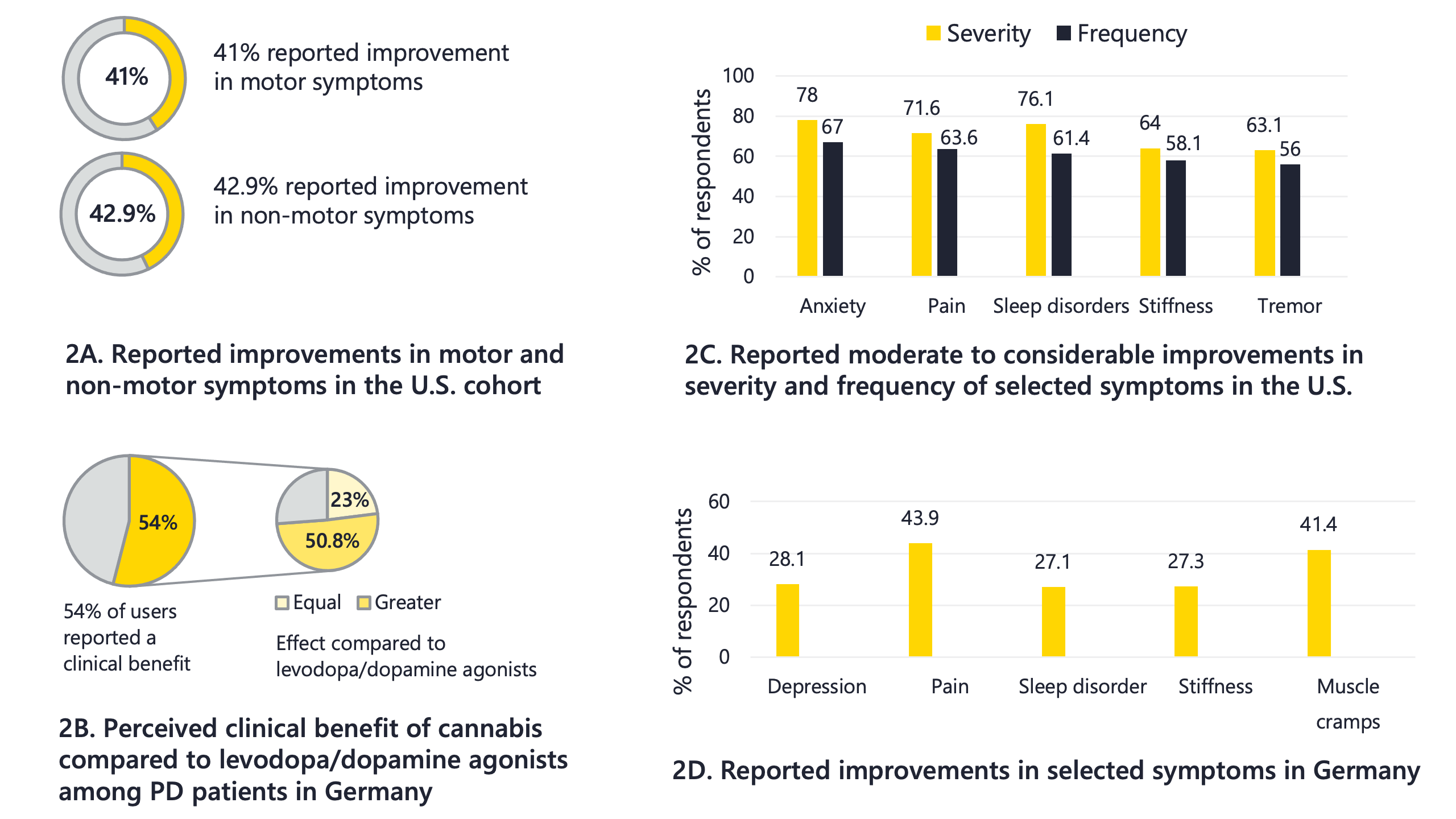 Across the two studies, there were similarities in the symptoms for which improvements were reported. The two studies revealed that patients perceived an improvement in depression or anxiety, pain, sleep disorders, stiffness, and tremors or muscle cramps with cannabis use (Figures 2C, 2D). Improvements were reported by a higher percentage of cannabis users in the U.S. cohort than the German cohort, with over 70% of respondents reporting a moderate to considerable improvement in the severity of anxiety, pain, and sleep disorders (Figure 2C). Considerable improvement in selected symptoms was also associated with reported meaningful change in QoL in the U.S. study.

Lack of knowledge about medical cannabis in the PD population

Lack of education and awareness around the potential therapeutic effects of medical cannabis is a key  issue in this area and one of the main barriers to access. A lack of understanding of the types of cannabis strains, dosage, and routes of administration are likely to contribute to hesitancy in considering the use of medical cannabis as a treatment. Over half of cannabis users in the U.S. study reported that they had no information on dosage, types of cannabis or recommended frequency of use (Figure 3A). 22.2% of users did not know about the strain of cannabis they were using or what concentrations of CBD and THC it contained. Similarly, only 8.8% of respondents in the German study knew the difference between CBD and THC and only 28.8% had any knowledge about routes of administration for medical cannabis-based products (Figure 3B). Individuals that acquired cannabis through medical dispensaries in the U.S. (only 38.8%) were more likely to have information on the type of cannabis used, highlighting the need for control and regulation in the use of cannabis. Roughly half of respondents claimed that they were informed on the possibility of legal eligibility for prescriptions of medical cannabis in the German cohort (Figure 3B).

Figure 3: Reported lack of knowledge about medical cannabis in the PD population 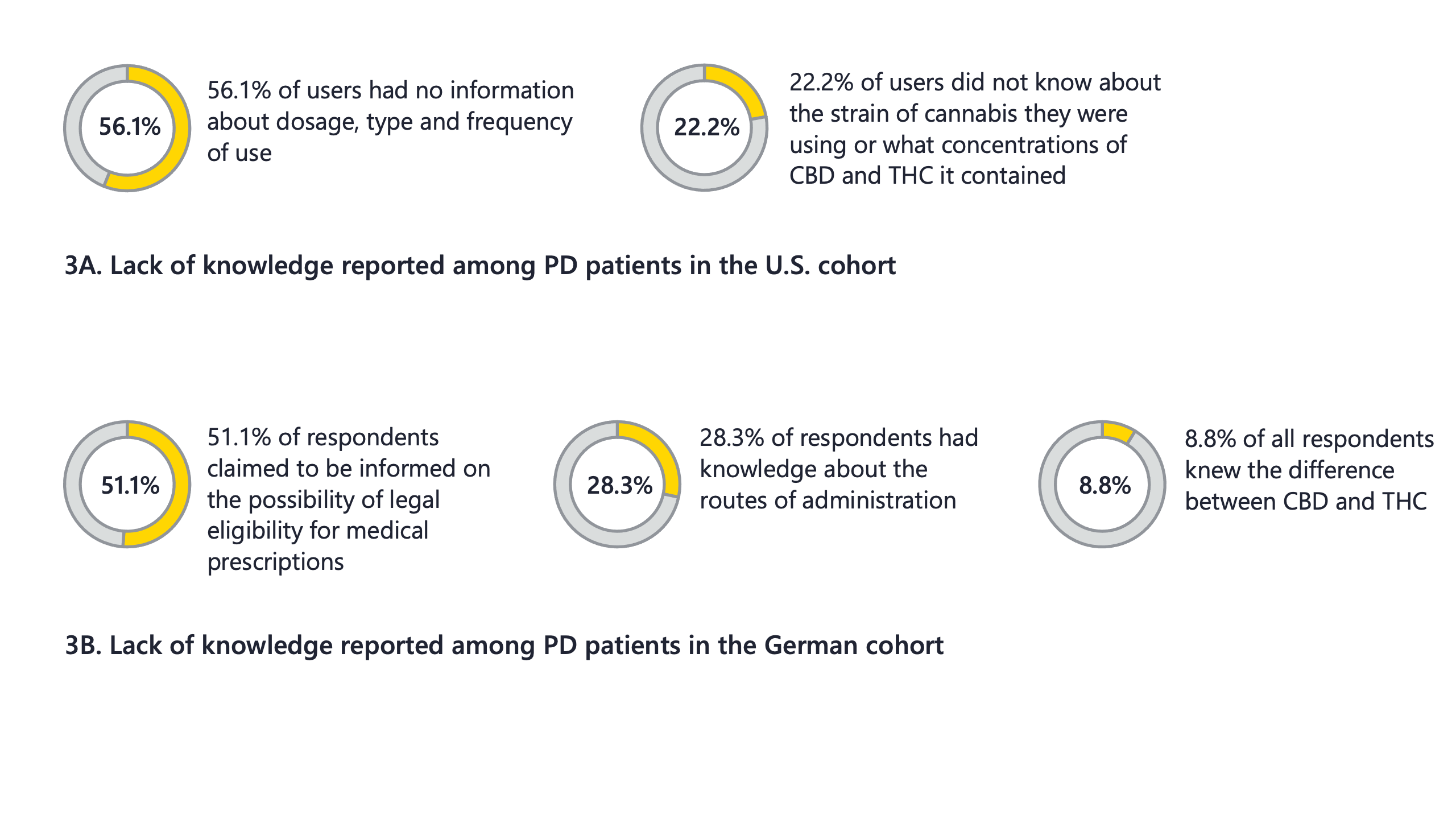 Figure 4: Reported interest in education around medical cannabis, involvement in clinical trials, and use to treat symptoms 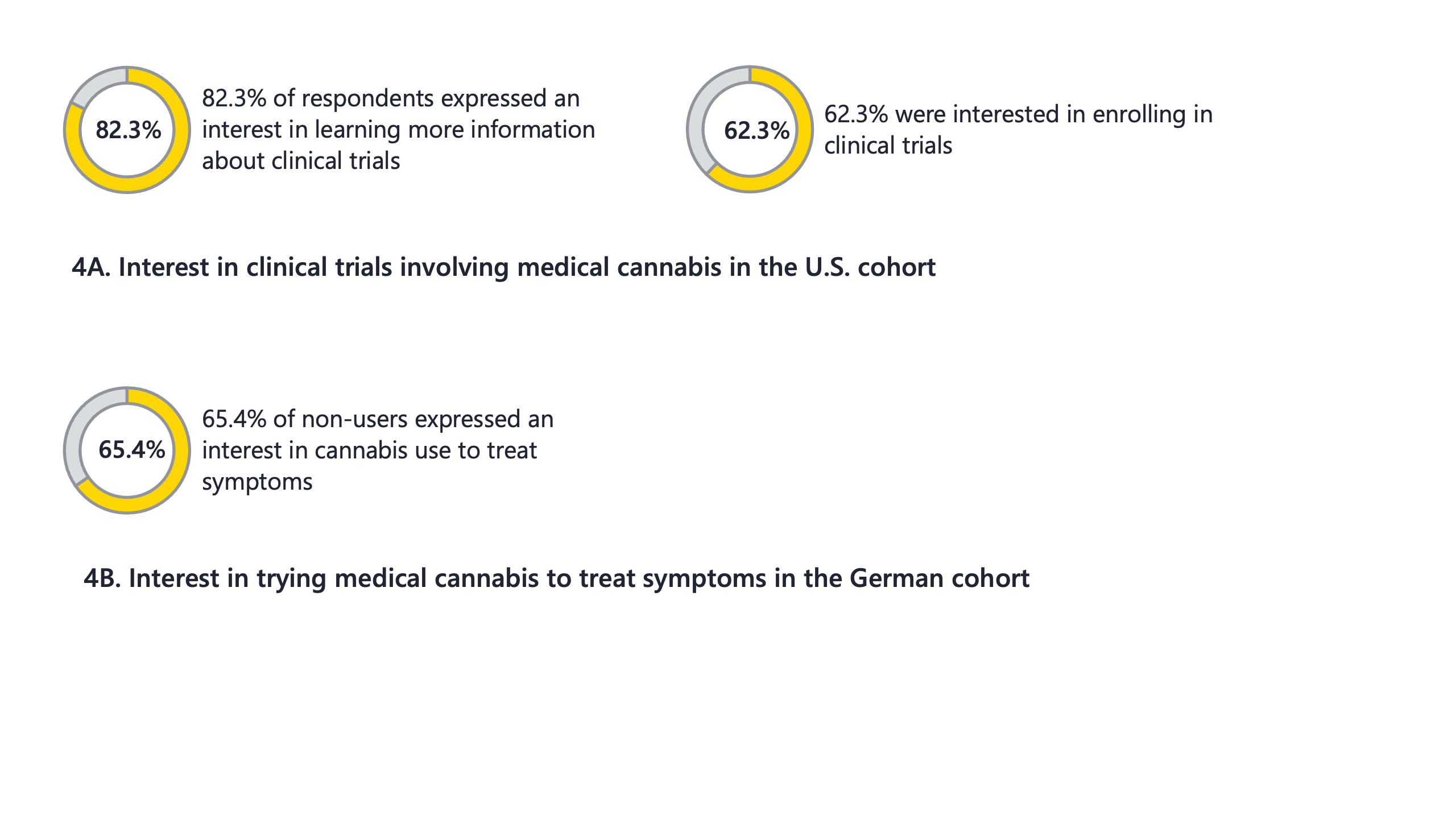 These studies are important to better understand patients’ knowledge, experience and perceptions of using cannabis for Parkinson’s. Fears around side effects and addiction, lack of evidence, stigma and discouragement from healthcare teams were all identified as barriers to use for PD patients. However, both studies highlighted that some PD patients are already using cannabis to treat their symptoms, with many reporting positive effects, indicating that many patients are managing their own treatment and using cannabis, perhaps in some cases illegally, to ease symptoms and reduce the burden of their disease. The majority of patients, including many of those that had never tried cannabis, reported an interest in exploring the potential of medical cannabis as a treatment option, possibly through clinical trials. The power of the patient voice should not be overlooked in this disease area and harnessing the patient perspective will be important if stakeholders are to further explore and successfully demonstrate the clinical benefits of medical cannabis in controlled trial settings.

More clinical-grade studies are required to drive the conversation around the potential benefits of medical cannabis and the barriers that still exist in both access and understanding with these medications. The upcoming national trial to test the efficacy, safety and quality of medical cannabis in France is one such attempt to drive robust evidence in this space.  The two-year trial will involve up to 3000 patients with varying conditions such as refractory neuropathic pain, drug-resistant epilepsy, painful spasticity from multiple sclerosis or other issues within the central nervous system [14,15]. Success of this trial may lead to legislation of medical cannabis in France, demonstrating the importance of generating evidence of the clinical benefit of medical cannabis through clinical-grade trials.